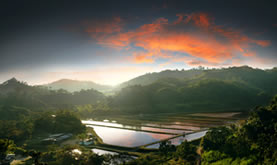 A while back, the wisest of wise, after meditating for a long time about the divine and the human, of the closest and the furthest surroundings, decided there was no wisest person than him, that he who could be able to experience on everything that made life be life and announced to the four winds that he would dedicate himself to travel around the world to try everything. Thus, he did. He tried what other people already had lived and gave a new definition to each experience that he would encounter.

When he returned, the people began asking him all type of questions, to see if they could make him doubt or be surprised. Alas, nothing. Each question had a perfect answer which nobody could discuss. After a good short while, the wise person began to become bored so he challenged that somebody take something to him that he had not tried yet. If that would happen, he would be makethe person full of wealth..

– You have something to say to me? , she asked.

– I was mistaken, I have not tried everything, the wise person answered with surprise.

– I do not know how to describe what you have given me and for that reason I want to fulfill my word giving you the wealth never you never imagined.

– Thanks, but I do not need anything else. What you have finished tasting are three of my most precious treasures, the Soursop, the Mangosteen and the Tilapia and I gave them to you to show you that it is always possible to be surprised with what the Earth and the Water can give us.

-That is true, but before you go away, can you give me your name?