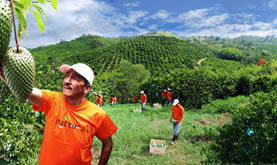 Originates from the Amazon and the Caribbean Antilles. In Colombia the development of the harvest begins in the XIX century, just a short time later around 450 hectares had grown with this fruit, as production techniques improved, the areas would grow and at the same time, the quality and the yield of its harvests. At the moment there are approximately 2500 technologically enhanced hectares and distributed in nearly ten clones.