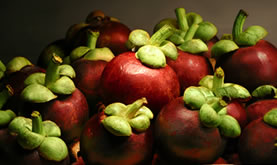 The Mangosteen or Jobo of India (mangostana Garcinia) is a tropical tree whose origin is Southeast Asia (Indonesia). In the last 150 years it was sent to Africa, Australia, South America and to Colombia. It was brought from the British that built the overhead cable car that leads from Mariquita to Manizales. The most extensive orchards in Colombia are found in Mariquita.

A legend exists where Queen Victoria would offer the title of knighthood to any person who could bring a fresh Mangosteen to her. Sadly, nobody managed to deliver the Mangosteen. According to the legend, the impossibility to preserve the fruit during weeks of the long trip, prevented people living outside the production regions, to try and taste this fruit. Nevertheless thanks to the search of the Queen, the fruit has aquired the announced title, ” Queen of the Fruits” , and by this she meant there is no fruit that resembled it. This name is still used by fans of the Mangosteen all around the world.